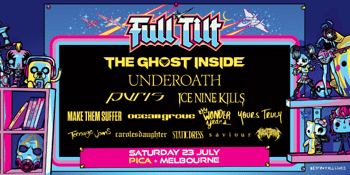 Just when you thought Full Tilt was done and dusted for 2022, the team at Destroy All Lines have brought their A game to deliver a sequel of truly epic proportions, with an army of international and local alternative acts ready to descend on the East Coast this July.

Boasting more star power than Mario on an invincible race to the finish line, Full Tilt will journey from Eatons Hill Hotel in Brisbane to the heritage-listed Bella Vista Farm Park in Sydney, before closing out proceedings at PICA (Port Melbourne Industrial Centre for the Arts) in Melbourne.

As for the bands ready to roll in round 2 of Full Tilt this year?

Fearlessly leading the pack are California metalcore heroes The Ghost Inside armed with their blistering self-titled fifth album released in 2020. Expect an absolute sonic KO from these LA lords when they take the stage. Also joining in on the action is Florida rock staples Underoath who will bring their brand-new album Voyeurist along for the ride, while pop rock gets set to entirely level up in the hands of acclaimed genre-chameleon PVRIS.

Also wielding some extra international glitz and grit, The Wonder Years will bring some searing feels alongside some mallgoth goodness courtesy of carolesdaughter, and punked-up bliss from Static Dress. And prepare to unlock some extra heavy Aussie spice via Saviour and To The Grave.