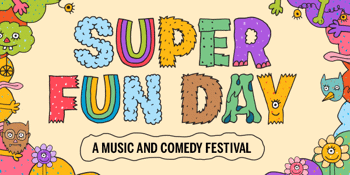 Giving new meaning to the term, ‘mixed bill’, Super Fun Day combines music and comedy in one unbelievably uplifting format, and promises to be the cure to all our cognitive ailments at the end of the Brisbane summer.

Hockey Dad will be relishing their return to the stage after being promptly removed from their last one mid-performance when lockdown curfews descended on Brisbane unexpectedly in June. Despite all the touring setbacks, Windang’s favourite duo are determined to bring audiences their new album, Brain Candy, and for good reason too - the ARIA Top 5 album snagged itself a spot amongst triple j listeners' Top 10 Albums of 2020.

Fresh off the success of their Netflix series Big Ol House Of Fun, Aussie comedy heavyweights Aunty Donna will bring their brand new festival-exclusive show along for the ride. Their performance promises an eclectic mix of music and sketch, along with dozens of different drums, probably.

Presently touring the United States, and gracing the hallowed stages of Late Night television, Middle Kids are taking the title of their new album, Today We’re The Greatest, quite literally.

This brilliant trio will lead an all-star ensemble of some of the country’s finest entertainers for this super special event that has also promised to throw in a bit of karaoke for good measure. Good times, get around ‘em.