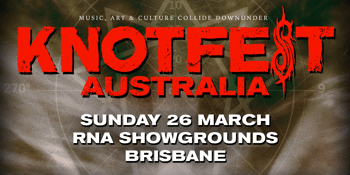 A staple at KNOTFESTs all over the world, the KNOTFEST Museum will also be making its way to Australia for the very first time. The KNOTFEST Museum features a jaw-dropping collection of items from the band’s history and a fan-favourite attraction at the other KNOTFESTs around the globe. Tickets are strictly limited in each city. Knotfest Brisbane is an 15+ Event.