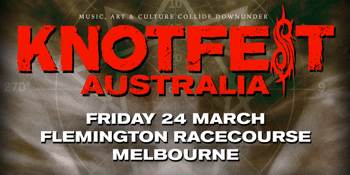 SLIPKNOT | PARKWAY DRIVE | MEGADETH | TRIVIUM | NORTHLANE | AMON AMARTH + MORE!
Flemington Racecourse (Flemington, VIC)
Friday, 24 March 2023 11:00 am
114 days away
15 Plus Licensed
Festivals
Music
Send this event to
The music and counterculture experience created by the multi-platinum sonic phenomenon SLIPKNOT, will hit the East coast of Australia starting on Friday, March 24th at Flemington Racecourse in Melbourne, before making its way to Sydney on Saturday, March 25th at Centennial Park and wrapping up in Brisbane on Sunday, March 26th at RNA Showgrounds.

A staple at KNOTFESTs all over the world, the KNOTFEST Museum will also be making its way to Australia for the very first time. The KNOTFEST Museum features a jaw-dropping collection of items from the band’s history and a fan-favourite attraction at the other KNOTFESTs around the globe. Tickets are strictly limited in each city. Knotfest Melbourne is an 15+ Event.