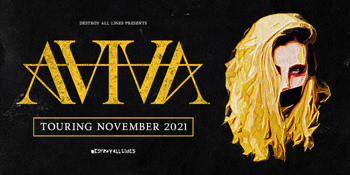 with special guests
Wrangler Studios (West Footscray, VIC)
Saturday, 13 November 2021 5:00 pm
258 days away
All Ages
Alternative
POP
Australian Artists
Music
Send this event to
Australian born, self styled emo-pop vocalist and global sensation, AViVA will embark on her first ever headline tour across the east coast in March 2021, playing a string of All Ages shows to her growing legion of fans, known as ‘Outsiders’