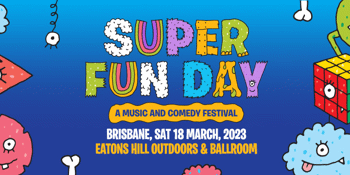 Giving a new meaning to the term ‘mixed bill’, Super Fun Day combines music and comedy in a uniquely uplifting format. Making its debut in early 2022 the festival immediately established itself as one of the standouts of the summer.

Dune Rats will make a very special detour from their European tour to headline Super Fun Day in 2023. No joke, Dunies will fly back to Australia for one hell of a hometown show, featuring their ARIA nominated album, Real Rare Whale. For the first time since 2013, they’ll be reunited with their longtime SoCal mates FIDLAR who have come storming back from a three-year hiatus clutching a handful of new singles from an EP hitting our ears in early 2023.

Next up, we’ve got a whole round of firsts: Manchester indie pop punks Pale Waves will make their long-awaited return to this side of the world (and their first trip to Brissy), arriving with their brand new album Unwanted and Chicago-based indie pop band Beach Bunny will premiere their self-assured songs in Australia in March 2023.

Lauded American comedian and actress Patti Harrison will also make her Australian debut at Super Fun Day. Known for her appearances in Paul Feig’s Feature A Simple Favor and television shows High Maintenance, Search Party, The Tonight Show and Full Frontal, Patti has also amassed an impressive list of TV writing credits including Netflix’s I Think You Should Leave and Big Mouth.

Indie rockers The Reytons are a word of mouth sensation in the UK whose meteoric rise is just astonishing. A completely independent, unsigned band from South Yorkshire, their debut album reached #11 on the UK charts and tickets to their shows are a hot property with the band selling out arenas in a matter of hours. Their Australian debut at Super Fun Day is not to be missed!