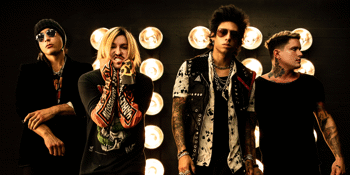 Destroy All Lines are proud to announce that Las Vegas-based post-hardcore band Escape The Fate will be returning to Australian shores in April 2023 for The Dead Masquarade national tour. They'll be bringing along their American friends in D.R.U.G.S. (Destroy Rebuild Until God Shows) for their first tour back down under in 10 years, and joined by The Beautiful Monument. Escape The Fate will be performing their self-titled album in full, as well as their other greatest hits from across their catalogue.

Singer Craig Mabbitt mentions, "I hope that people think of Escape The Fate as a good time, but a good time in a better way. We want people to connect deeply with the music and disappear in it. Get lost and then return from the album, or show, feeling inspired about themselves. We want to make people feel better about life, to know they can take on all its hardships. That's what the music does for us as a band. That's what we want it to do for the audience too."

Joining Escape The Fate on their 2023 Australian tour is Pontiac-based post-hardcore act D.R.U.G.S. Led by Craig Owens, their latest full-length record 'Destroy Rebuild' - their first release since 2011's acclaimed selftitled album - offers listeners a uniquely nostalgic sound while also exploring new territories and progressions, orchestrated to catch and keep your attention. "This album is my first step forward without thinking of running back," Owens stated. "I hope it can leave a mark and grow with people."

Alongside them are Australia's beloved hardcore group The Beautiful Monument, who signed to Greyscale Records in 2019, performed at Download Festival (AUS) and received triple j rotation for their single 'Deceiver'.