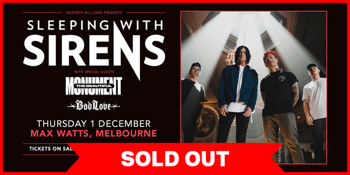 Since emerging in 2010, Sleeping With Sirens have tested the boundaries of rock by walking a tightrope between pop, punk, metal, hardcore, electronic, acoustic, and even a little R&B. This high-wire balancing act attracted a faithful fan base known as “Strays,” generated global album sales in excess of 1.5 million, ignited over half-a-billion streams, and achieved a trio of gold-selling singles.

They've collaborated with MGK on Alone and Pierce the Veil on the gold-certified King For A Day. Beyond selling out shows worldwide and receiving acclaim from The New York Times, Alternative Press crowned them “Artist of the Year” at the Alternative Press Music Awards, proclaimed “Kick Me” the 2015 “Song of the Year”, and featured them as cover stars a whopping seven times.